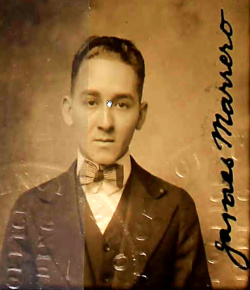 James (Santiago) was my father's uncle. My father never spoke of him, but I remember hearing somewhere that everyone loved Uncle James. Like his brother Borinquen, he lost his parents within a two-month period in 1916. Since I know that James worked in New York City, I assume he travelled there after his parents died.

In 1917, James applied for a passport for the purpose of travelling to Canada to find work. This was through the consolate in New York City, so he was already there at that time. He listed his occupation as "Timekeeper". On at least one census form he indicates that he attended college for one year, but it is unknown where. It is interesting that he apparently went by James from childhood, or at least by the time he was 20. There is no listing where his material name (Rios) is used.

James registered for the WWI draft in Philadelphia, on June 5, 1918. He was working in Philadelphia at the time for a company named Greenbaum Bros. & Co. His family reference was listed as his oldest step-brother, Henry, in New York City. He was inducted into the service on September 2, 1918, and discharged in 1919. Based on sites such as this one, Interpreting the World War I Service Cards, I believe James was inducted directly into the infantry.

Interestly, he is listed as "Colored" on his military card. This is reinforced by the fact that he was assigned to Regiment 374, which was a regiment in the 94th Infantry known as the Porto Rican Division. Apparently, another one of those regiments was dedicated to Black troops, named the "375-Colored". 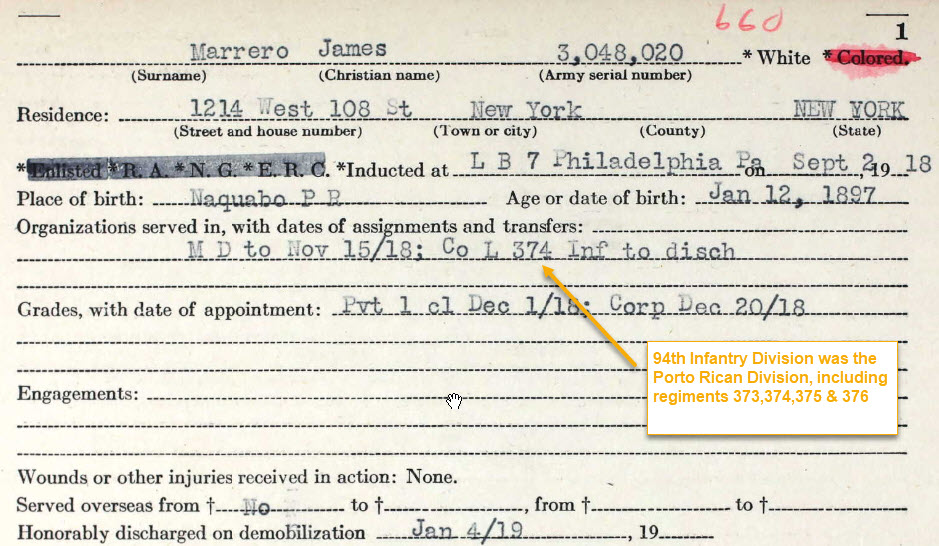 It is interesting to note that James' induction occurred in Philadelphia, although his address is listed as New York City. It is not clear if he was "stationed" in one place or the other. The Porto Rican Infantry was designated to train at Camp Las Casas, in Santurce, PR. James sailed from New Your City in early November (6th,8th?) on the Maracaibo and arrived in San Juan on November 15th. During his trip, the first WWI Armistice was signed on November 11th to halt hostilities on the Western front at ("the eleventh hour of the eleventh day of the eleventh month").

It might be assumed that James moved back to New York City due to the "Spanish" Flu. According to this account, An Account of the Spanish Flu in Philadelphia in 1918, the city logged over 150,000 cases and 12,687 deaths from influenza and related pneumonia between Sept. 20 and Nov. 8, 1918. It would have been a good time to move elsewhere.