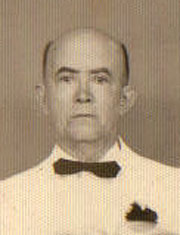 Trifón Eugenio Marrero Hernandez was the third child and second-born son of Santiago Marrero, born in 1886. Like his older brother Zoilo, he was given a rare and unusual name. It is of Greek origin and means gentleness, which for someone that did know him, seems to fit his picture. The other striking thing about not knowing him, is how his name and signature pops up on lots of documents, such as marriage forms, death forms, military registrations, etc. He seemed to be the stable one that everyone else depended on.

Trifón moved to Vieques with the rest of the Santiago family, sometime between 1898 and 1910. Since the 1900 Census was lost in a fire (the first one that included Puerto Rico), there are no records of where the family members were located at that point. But in 1910, Trifón and his wife were living with his mother-in-law. He was 24 and listed as a cigar maker ("tabaquero").

He had married Laura Legrand Pillar (the marriage certificate uses a final "d", although other sources do not) in Humacao on May 9th, 1909. Laura's parents were Pedro Carlos (Matilda) and Clemencia Legrand Pillar. Her father was apparently living at the time of the marriage, but is not listed in the 1910 census. They were all originally from St. Thomas, Virgin Islands.

As his brothers did, Trifón migrated to the states sometime around 1918. Interestly, he registered for the WWI draft on July 5, 1917 - from Humacao. Meaning the family moved back to Humacao from Vieques. He is also lists his occupation as a cigar maker. By this time, both his parents had died and he did not yet have any children.

Trifón and Laura sailed on the San Juan to New York on July 2nd, 1919.

In 1920, Trifón and Laura were living with his older brother Henry and his family on Essex Street, in Manhattan Assembly District 4. Trifón and Laura still do not have children. But there are a total of seven people living in the household, including Yosa and Rafala Rodriquez (cousins). Both Trifón and Laura are listed as doing factory work.

By 1930, Trifón and Laura have their own apartment, which they are sharing with step-brother James and his wife Addeline, a cousin Helen Diaz, and two children: Louis (18), listed as a son, and James (8 months), listed as a stepson. (It is not yet clear whose children these are.) Trifón is listed as a laborer for the subway.

By 1940, Trifón is living with and their two children, George (7) and Georgina (6). The household also includes his sister-in-law/mother-in-law Delores Santiago (62) and her daughter, Mary 25). Trifón is a Porter for a private corporation.